I’m currently a fifth-year doctoral student studying Biostatistics in the Department of Biostatistics, Epidemiology, and Informatics at the University of Pennsylvania. I am an active researcher within the PennSIVE Center under the co-mentorship of Russell [Taki] Shinohara and Kristin Linn.

Primarily, my research interests lie in the development of statistical methods for analyzing neuroimaging data sets with the goal of understanding disease processes in the brain. Currently, my projects involve the analysis of multi-sequence structural MRI to study neurodevelopment and multiple sclerosis. I collaborate regularly with experts in bioengineering, radiology, and neurology. Beyond my statistical work in neuroimaging, I love building software tools that make data science better, faster, and more accessible.

I earned my M.S. in Biostatistics from the University of Pennsylvania in 2017. My thesis proposed a novel machine learning algorithm, MIMoSA, to automatically detect T2 hyperintense white matter lesions in multiple sclerosis. Before coming to Penn, I obtained my undergraduate degree in Biology and Statistics (Honors) from the University of Connecticut (Go Huskies).

Outside of biostatistics and data science, I love going to concerts, running, hiking, traveling, and baby-sitting my nieces and nephew. I love wandering where the wifi is weak. Sometimes it is in tents.

The photo at the top of this page is from hiking in a cloud forest in Monteverde, Costa Rica. Some of my favorite adventures are included below.

Not sure I understood the gravity of the whole sky diving thing.

While an undergraduate at the University of Connecticut, I studied abroad in Granada, Spain. Queen Isabel said once, “Esta ciudad, que la tengo en mas que a mi vida.” Roughly translated this means that Queen Isabel carries Granada in more than just her life. It is more poetic in Spanish but I couldn’t have said it better myself. This is a picture of me in front of La Alhambra on a recent visit back to Granada in 2019. La Alhambra is a palace built by the Moors and conquered by the Catholics and is one of the most visited tourist attractions in Europe. 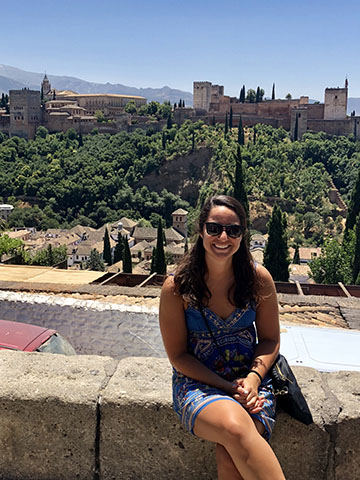 I had the fortune of taking a class in Spanish culture during my study abroad experience where I got to visit numerous Spanish cities. This photo is from a hike in Ronda, Spain. It is my favorite hike of all time since it is not too main stream.

I felt runderful after my friend Lori and I finished the Philadelphia Half Marathon this past year. Lori and I played travel soccer together and have been friends and workout buddies since we were 7 years old. 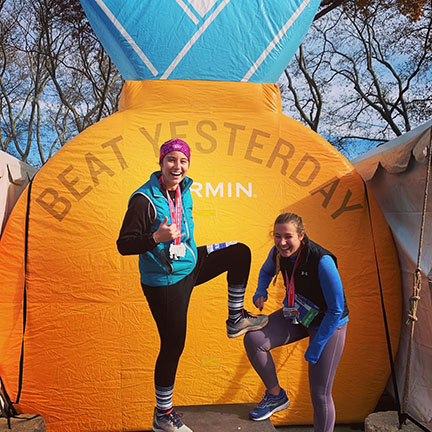 After the Joint Statistical Meetings (JSM) in Vancouver, Canada I decided to go out on a limb and branch out so I spent some time hiking through the Canadian Rockies. This was a river running through Banff National Park.

I went to the 2019 Women’s World Cup Championship match in Lyon, France. The USWNT team made herstory defeating the Netherlands 2-1. Equal pay chants erupted in the stadium and were heard around the world. As a trailblazer in the sport Mia Hamm was my favorite player growing up. These days I find myself rooting for Julie Ertz. She is both creative and consistent on the field. These are two qualities I admire and try to incorporate into my own career.

Below I’m baby-sitting my niece Maia and my nephew Max. Since this photo was taken I welcomed another niece Serafina into my life. I have another nephew, name to be determined, on the way! I like to think I’m nacho average aunt. 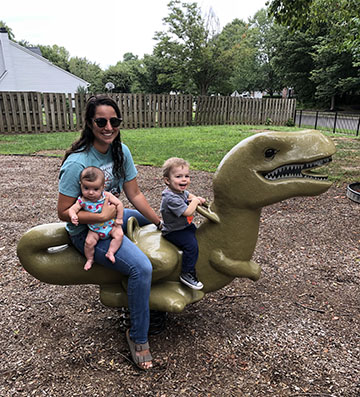 If you couldn’t tell from my captions, I also really love puns. All puns in this post are in italics. Did you catch them all?